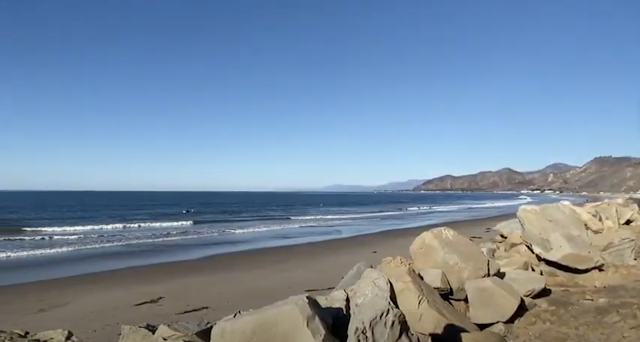 Picturesque Ventura
I love how I went from one recumbent cycling group in the SF Bay Area to meet up with another in Ventura. I had a great time with Alan, Anne and Dawn bombing along the trails all over the area. The weather was beautiful and the riding was fantastic. We took a ride from Ventura to Ojai on a trail I had never been before. The route from Ventura to Ojai was gently uphill for about 20 miles. We stopped at a terrific restaurant for lunch and with full bellies coasted most of the way back to Ventura. I camped in my trailer outside Alan and Anne's home for 3 nights. They really wanted me to stay in a guest bedroom but I was more comfortable in the trailer where I have all my stuff. We spent every evening opening a few bottles of wine yakking the night away. I hadn't seen Dawn in a couple of years and it was really fun to get caught up.
Alan, who rides a trike, had been in touch with the Ventura Recumbent Cycling Group and set up a ride for Saturday. Wayne and Kaye drove by the house on their way making a surprise appearance just as we were getting ready to start riding. Leaving Alan and Anne's home I was worried about the wind but it died down as we got to the beach at the meet up point.  It was only a few miles to the start and there was a good group of about 17 riders. Wayne and Kaye had coffee and muffins for everyone which is a tradition.

We took an out and back route north along the ocean about 15 miles. The day was sensational with breathtaking views. Some of the riding was on dedicated bike paths and sometimes we were riding on Hwy 101. The hwy was noisy but had a big shoulder and I felt safe. It was the middle of December and the weather was fantastic. I loved the ride and seeing old friends.
Leaving Ventura, I didn't have far to go. I was going to drop off my trailer in front of a cousin's house in Simi Valley so I could drive into LA to visit family with just my truck. I spent 5 nights visiting my 96 yo aunt Eve. The weather had turned unseasonably cold and rainy. Every day there were big storms passing through dumping sheets of rain. I did some shopping and took my trike to Bent Up Cycles to get a new chain put on. The rains were relentless. I felt lucky to be driving a 4-wheel drive vehicle that is higher off the ground. The freeways were  flooded. Los Angeles rarely sees this kind of rain and it was dramatic. The good news is there was also lots of snow falling in the mountains which should help with the drought conditions California has been experiencing for many years.
One bummer is my aunt fell while I was visiting. 2 tables broke, a sewing machine crashed to the floor but my aunt was ok. She has lived in her home for probably 65 years and there are 3 sets of stairs. These steps have probably kept her in better physical shape but, now, I'm wondering how much longer she can be on her own.
With the fall, my aunt lost some confidence. I took her to her daughter's house to keep an eye on her for a few days. I got my truck and trailer hitched up and made my way to the desert. This was a very long drive. I made the mistake of thinking the day before Christmas would be quieter on the freeways. Instead it was very slow going. A 3.5 hour drive took over 6 but I made it to my good friend Joni's Catholic church. I have been here a couple times previously. This church has become an oasis in the desert for me. Because of Covid, the church is closed and there is a lot of room for my trailer. Joni can offer water, electricity and wifi. For me, with the trailer, it is a perfect setup. There is lots of shopping within walking distance and the cycling is fantastic. The area was experiencing a serious cold spell with over night temperatures below freezing. These cold temps curtailed my cycling plans.
I had a serendipitous meeting with an old friend, Matt Galat, of Jayoe Nation. He is transitioning from his life in China to Van life and doing a tour all over the US to pick up many of things he will need. He happened to be passing through the area and stopped by parking next to my trailer for 2 nights. Even though we talk often and have known each other for a long time, this was the 1st time we actually met. We both felt like we were visiting an old friend and gabbed away 2 days together. He gave me a great idea for a Youtube video series that I'm looking forward to trying out. Much of the time I did my trike touring was before social media. There was no Facebook, Twitter, Instagram or Youtube. He suggested I take stories from my blog and tell them in video like I'm talking to an old friend over a beer.
It took a few days for the storms to pass and the sun to return. Joni rides a trike and we have a good friend, Dave, who also rides a trike living close by. Joni and I decided to go for a ride when I discovered my trike was still having issues. The chain was jumping and it seems the single 16 tooth cog on my Rohloff Speedhub needed to be replaced. I put in a call to Bent Up Cycles and got an appointment.

This was actually fortuitous timing because my cousin in Simi Valley was going out of town and asked me to stay with my aunt for 5 nights. My aunt and I always have a good time and I was happy to return to Los Angeles.  This also gave me the opportunity to go back to Bent Up Cycles.
Video of driving to Bent Up in a terrible rain storm
I know the reason the mechanic at Bent Up Cycles didn't catch the worn cog was because the weather the last time Myrtle was in the shop was atrocious. The mechanic couldn't take the trike for a test spin because the roads were flooded everywhere. Spinning the chain in the trike stand wasn't enough to make the chain jump like it did under pedaling tension.

There are a couple of very interesting aspects of replacing the Rohloff cog. The older model Rohloff, like mine, requires a special Rohloff cog removal tool. Any shop that deals with Rohloff will have this tool. The other point of interest is these cogs can be reused. The cog can be flipped and it is like a new cog.

Owner, Dana Lieberman, met me outside and helped get Myrtle out of the truck bed. He rolled the trike into the shop and with the help of mechanic Chris lifted it back into the trike stand. Removing the cog shouldn't be a big deal but this cog has been on this Rohloff since 2014. I bought the Rohloff used with 1,000 miles on it in 2018 and the cog has never been removed. There was so much grit in the cog threads from all the different countries I have traveled in. Chris and Dana had a heck of a time getting it loose. They ended up putting the wheel with the Rohloff removal tool in a workbench vise. They actually broke a chain whip tool before finally getting it off. Once the cog was loosened, flipping it and getting the wheel back on the trike took only a few minutes. I should be able to get as many miles with the flipped cog as I did up until this point.
Another surprise was Matt Galat met me at the shop. This would be the 2nd time I saw him in less than a week. It was really fun being with Matt and Dana. After Myrtle was fixed, we all went out for lunch and continued yakking. These are really good guys!
I spent a few more nights with my aunt before returning to the desert. My future plan is to head to Yuma, Arizona. This has become a yearly medical stop-over because I don't have health insurance. There is a medical town across the border in Mexico, Los Algodones, where I have routine stuff done. I don't have any big medical issues and am, luckily, in good health. I go to a dentist to have my teeth cleaned, have complete blood and urine lab-work done to make sure everything is as it should be. I take one medication for hypothyroidism and need to have a doctor look at the lab-work thyroid panel to get a new prescription filled. This is all very easy to do and, typically, takes only a few days.
Yuma will be my next stop and it is only a 2 hour drive. I ended up spending much longer at my desert oasis near Palm Springs than I originally thought. I decided to wait at the church until after the holidays because I was worried that the Mexico medical offices might not be open. I've been busy working on videos while I have reliable wifi to get caught up on all the fantastic riding I did in the Bay Area and Ventura. Look for those to be published over the next couple of weeks. And, of course, I've done some fun local rides while I'm here. I've only got a few more days in the desert.
With my friend, Dave in the wind turbine farms near Palm Springs
Seems there is always trike riding to do everywhere I go and I am all about it.

Posted by Travels By Trike at 8:02 PM